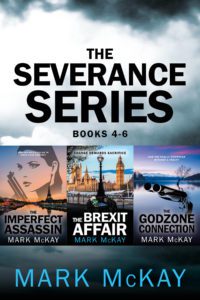 How far would you go to serve your country?

Take a woman, whose physical abilities have been enhanced by the latest genetic technology. Train her to use them to kill enemies of the state. Put her out in the field and let her do her job. And when she’s done your bidding and she’s no more use to you, decommission her with extreme prejudice. If you can.

It is 2019 and three years after the United Kingdom’s decision to leave the European Union. Nick Severance is on a visit to the UK from Japan when he is contacted by Gabriel Johnston of MI6. One of Johnston’s agents has disappeared after taking delivery of a brand-new computer virus that could seriously damage the UK’s infrastructure. With suspicions of a traitor in Johnston’s team running high, Nick agrees to unofficially assist in tracking down the missing agent.

Can you really disappear without a trace?

Phoebe Fraser is an English woman working at a private bank in Tokyo. When she steals $10 million from a client’s account and then disappears, Nick and Mariko Severance are brought in as private investigators, to track her down.

It looks like a simple case of greed, until the body of someone close to Phoebe washes up on a beach in Tokyo Bay. Murder becomes linked with theft and Phoebe is the main suspect. One way or another, she has to be found.

The search takes Nick halfway around the world to New Zealand, where he unravels a story involving insider dealing, love and betrayal, and ultimate revenge. But he isn’t the only one searching. Certain interested parties also want to find Phoebe and for reasons of their own, silence her forever. It’s really just a question of who gets to her first.

Available in ebook format only. Click THIS LINK to take you to your preferred retailer.

Affiliate disclosure: As an Amazon Associate, I may earn commissions from qualifying purchases from Amazon. Theme by Anders Noren — Up ↑