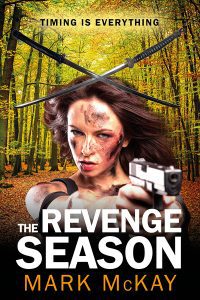 The third book of the Severance Trilogy

Is revenge really a dish best served cold? Nick Severance is about to find out, the hard way.

When pharmaceutical researcher Julian Frost is brutally murdered, Nick Severance is asked to investigate. Julian had recently returned to England from the Amazon rainforest in Peru, where he was looking for plant samples that could be developed into profitable new drugs. What he found there apparently sealed his death warrant.

Nick retraces Julian’s journey and meets some new and interesting people, some of whom would like him dead. While he attempts to survive their unique brand of hospitality, a new threat emerges in the form of someone from his past, who thinks this is the perfect moment for retribution.

Faced with hostility on two fronts, Nick’s chances of completing his investigation and living to talk about it seem slim. In a situation where appearances are deceptive and motives are misleading, can he find a way to regain the initiative, before it’s too late?

Available in print, audiobook and e-book formats. Simply click THIS LINK to take you to  your preferred retailer.

Affiliate disclosure: As an Amazon Associate, I may earn commissions from qualifying purchases from Amazon. Theme by Anders Noren — Up ↑