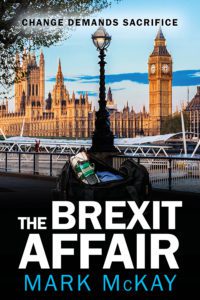 The fifth book in The Severance Series

It is 2019 and three years after the United Kingdom’s decision to leave the European Union, negotiations drag on. Scotland has voted ‘Yes’ to independence and Northern Ireland is about to hold its own referendum on whether to stay in the UK or join the Republic. Britain’s future is uncertain.

Nick Severance is on a visit to the UK from Japan when he is contacted by Gabriel Johnston of MI6. One of Johnston’s agents has disappeared after taking delivery of a brand-new computer virus that could seriously damage the UK’s infrastructure. With suspicions of a traitor in Johnston’s team running high, Nick agrees to unofficially assist in tracking down the missing agent.

As events unfold, disruption and mayhem are unleashed as part of an experiment in using cyber warfare and terror as a political strategy to change the balance of power in post-Brexit Britain. Can Nick and his friends stop the people behind that strategy before hundreds of innocents are killed? Or will they end up as just so much ‘collateral damage’ instead?

ShareTweetSubscribe and get a free book!